Hailed by both critics and fans of the style, Hybris is often touted as one of the best progressive rock records of the last decade of the last century. The track “Jordrök” opens the record with a somber start, which gives room for more than eleven instrumental minutes of many variations, with all instruments (mellotron, guitar, flute, guitar, keyboards, drums).

ANGLAGARD, a term invented by the guitarist, which can be translated as “Jardim de Anjos”, or “Lugar de Anjos”) was a Swedish group created by musicians Tord Lindman (guitars and vocals) and Johan Högberg (bass) in the summer of 1991, and began to take shape with the arrival, still in the same year, of Thomas Johnson (piano, mellotron and synthesizers), Jonas Engdegård (guitars) and Mattias Olsson (drums and percussion).

The following year, Anna Holmgren (flute and saxophone) joined the boys, and the definitive formation of the sextet was established.

A demo tape recorded in 1992 secured them a contract with the label Mellotronen, and in the same year the set would release their debut record, which was acclaimed worldwide, helping to rekindle interest in progressive rock, a style that was at a low point in the beginning of the 1990s, a period dominated musically by "grunge" coming from Seattle.

Skip to the beginning of the images gallery
Details

At about five minutes, a passage to the church organ (which refers to the compositions of Rick Wakeman in the 1970s) opens space for a “duel” between guitar and keyboards that is one of the best moments of the album (and it is interesting to notice in this track as the group knows how to mix agitated and noisy passages with other calm and silent ones in a very harmonious way).

The second track, “Vandringar i Vilsenhet”, opens with a piece of flute that refers to the first phase of King Crimson, but soon takes on a somewhat somber / half “divine” tonality, which, after a short stir, gives us the first phrases sung on the album, in a more frantic rhythm than the music had until then, falling later in a "broken" and complex sequence worthy of the biggest names in seventies progressive rock and that, almost twelve minutes after the beginning, will flow in a distressing ending and with a “macabre” climate, thanks to the mellotron and the flutes.

In the sequence we have “Ifrån Klarhet Till Klarhet”, the shortest of all (just over eight minutes), but which already begins with a frantic stretch of guitars and keyboards to take the breath away from Yes's most passionate fan.

This passage is not very long, and a calmer stretch (and with vocals) comes to “lower” the initial excitement a little. But a beautiful passage of the flute soon leads us to new rhythmic variations, with the track abruptly ending and leaving us that characteristic feeling of “I want more” typical of good emotions.

Finally, the more than thirteen minutes of “Kung Bore” start with keyboards, bass and drums, continuing the “breaker” in the middle of the previous track, which gives way to a calm and charming passage of guitar and flute, which flows into more one of the few excerpts sung from the record.

But at this point, the most attentive listener already knows that a new rhythmic turn will take place, and, although not as abrupt as other previous turns, the music gains speed again, and, after many other changes of direction, a short section of the flute ends the album and leaves us with that desire to go back and hear it all again

A remastered edition released in 2000 brought the bonus track “Gånglåt Från Knapptibble”, which appears to be the demo version of “Skogsranden”, on the second disc, Epilog.

It is also worth mentioning that, on the Prog Archives website, Hybris has been singled out as the seventeenth best album of all time, which gives a beautiful idea of ​​his appreciation by progressive fans! 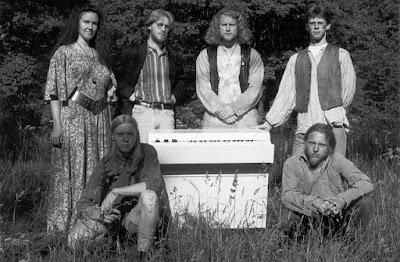